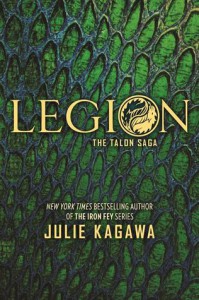 Gosh I thoroughly enjoyed that one. I enjoyed it so much I just said gosh. Blimey!

I've been following this series from the start and it has just gotten better and better with every book - I'm kind of quite sad that book 5 will be the finale I believe because I've been so engaged with Ember and Riley and all the rest, in a world where Dragons live among us disguised as humans and a war rages between Talon (the dragon hierarchy and a shadowy group if ever there was one) and St George (of the Dragon, obviously, and not exactly pure of heart themselves)

Julie Kagawa has built a beautifully layered world into the Talon series, with some memorable characters and manages to give you an adrenalin hit and an emotional tug on the heartstrings every time. The more you fall in love with the characters the harder she hits you - throwing everything and the kitchen sink at them and keeping you on the edge of your seat. After the cliffhanger of the previous book (and if you are looking for salvation in this review sorry you'll have to wait and read to see how that pans out) I was ready for high drama and got exactly that. As Talon's dastardly plans start to come into the light and Ember faces her brother head on, don't expect a walk in the park, you are going to be on the rollercoaster.

I have a love/hate relationship with Dante, a love/love relationship with Riley and stagger between adoring Ember and wanting to slap her - its great when a fantasy story can really immerse you into it to the level that you believe it all while you are there - I genuinely feel that perhaps Dragons are a thing for at least a few hours after finishing these.

Overall a really terrific addition to the Talon saga - and after the end of THIS book I am genuinely on tenterhooks waiting for the finale - will the good guys win out in the end? Who exactly ARE the good guys? Brilliant. Total utter escapism and all beautifully written and plotted.

Highly Recommended as a series especially for fans of YA fantasy.