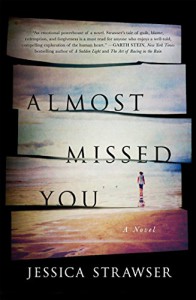 I enjoyed Almost Missed You - it was beautifully written, I think I liked the writing more than the story probably which was compelling but peppered with rather divisive characters who I had problems relating to on the level I prefer.

Still, it was a cleverly insightful examination of those things that can make and break relationships, the secrets that can become so large to the person holding them that they think there is no way of speaking them out loud - ending up with everyone concerned being in untenable situations.

Finn runs away from his wife taking their child with him. Suddenly and with no explanation. What follows is an exploration of why he did that, past events overtaking him with sudden repercussions. Jessica Strawser shows many levels, telling it from several viewpoints, including Caitlin, friend to both and this is a beautifully paced family drama.

I found it fairly fascinating to be fair. Finn annoyed me to the point of growling. Seriously insular, his reasons were entirely selfish - yes ok there are psychological issues here he's not entirely unsympathetic but mostly I wanted to slap him hard. That is ok right? Caitlin would rather leave her supposed best friend in agony rather than face up to her own secret and basically Violet was a dishcloth. Yet they held me in their grip the entire time, I wanted to know the outcome for all.

In the end I think it would be fair to say that for me this was a solid read that makes me want to read more from Jessica Strawser, but perhaps it did not quite light the fire under me that it could have done due to my personal dislike of the characters within.

Recommended for fans of womens fiction and family drama.