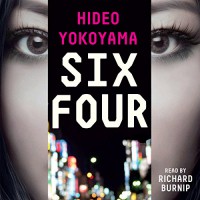 Six Four is really the most amazing read BUT you have to have patience. It is unexpected. I will be absolutely honest and say that at about 50 pages in (and this is a long one!) I almost gave up. If you get to that point kick yourself into continuing – it will reward you in many ways. From a little after that point I devoured it. It kicked in big time.

To clarify – the problem for me came with a bit of a culture clash – the names are all very similar and I was muddling up the characters and had to keep backtracking which was challenging.But then, like magic, suddenly all that goes away, you are bang in it.  Another thing to note: Hideo Yokoyama has written a slow burner of a novel, with no clear investigative track and a very different approach to things. If you are expecting a standard Crime novel with a detective and clues and suspects and the like, no. You only kind of get that. What you actually get is a character and political study which has an emotional and very intriguing mystery at the heart of it.

I can’t really tell you too much about the plot because to know it is to spoil it – Ive not read a construction quite like this before in which a crime story has very few of the defacto crime elements but manages to be a completely marvellous crime novel none the less. It is baffling and extraordinarily intelligent, a character fuelled creative piece of genius with a twist in the tale that Agatha Christie would get writers envy over.

It is a reading experience this one – it will engage the little grey cells (yes another Christie reference) and offer the reader something different in the field  – ultimately I can’t do anything except highly recommend this one for anyone that likes to think outside the box and if you fancy seeing a mystery story done in a very different yet highly credible way Six Four is definitely for you.

I loved it. Yes I did – despite having to engage high levels of concentration in the first little bit, because in doing so I ended up getting what I did out of it.  A bloody tremendous read!