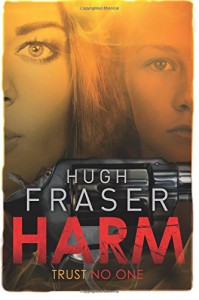 Harm is a really excellent thriller from the pen of Hugh Fraser - Better known as Captain Hastings in ITV's Poirot -but about to be known for something quite different if this is anything to go by.

We meet Rina - she is a paid assassin - told over two timelines, one while she is "on a job" in the 70's and where everything that can go wrong is going wrong and also in flashback to the 50's showing us her path and what has led her to where she is today.

It's an intuitive bit of writing when it comes to character development - seeing how Rina was, what she went through, how she lived - all leading up to what she is doing now, running from drug dealers and generally getting into trouble. She's kick ass though so is likely to get out of it - hence the "thriller" aspect of the whole thing.

The real intrigue of this one though is in the human interaction and the examination of why we do the things we do. Rina as a youngster growing up had litte choice in the matter - living in poverty, with danger on the streets from lowlife criminals and even danger in her own home - some of it is really emotive stuff. But then even so its a bit of a jump from tough girl to killer and the hows and whys of that make for a great if often sad story.

In the "present" timeline there is a lot of action, a fair few edge of seat moments (which are not exactly missing in the past either) and a rollicking good adventure. Violence yes (Although you know you are going to love Rina when, upon awakening to find a severed head on her pillow does not immediately scream like a girl or even have a rabbit in the headlights moment) but also a lot of depth of plot and a growing understanding of just how Rina can do what she does and do it all with barely a flicker.

A really most excellent read - the ending was kind of abrupt for me but to be fair the story had been told and there may not have been a way within the narrative scope to even that ending up - still I hope that Rina returns. Ooh look. Rina Returns. I've come up with a title. Not a very good one granted - but as long as we get to see this character again I'm going to read it no matter what the title.