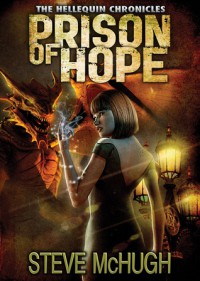 Long ago, Olympian gods imprisoned the demon Pandora in a human—Hope—creating a creature whose only purpose was chaos and death. Remorseful, the gods locked Pandora away in Tartarus, ruled by Hades. Now, centuries later, Pandora escapes. Nate Garrett, a 1,600-year-old sorcerer, is sent to recapture her and discovers her plan to disrupt the 1936 Berlin Olympic Games, killing thousands in a misplaced quest for vengeance. Fast forward to modern-day Berlin, where Nate has agreed to act as guardian on a school trip to Germany to visit Hades at the entrance to Tartarus. When Titan King Cronus becomes the second ever to escape Tartarus, Nate is forced to track him down and bring him back, to avert a civil war between those who would use his escape to gain power.

Prison of Hope is book 4 in the (wonderfully addictive) Nate Garrett series from Mr McHugh, once again I loved it – they are always the most tremendous fun, with magical mayhem, thrills and spills and a hugely intelligent mythology that borrows from our own.

In this instalment Nate goes on a school trip which turns out to be somewhat stressful – the witches are playing up, there is an escapee from Tartarus and once again he finds himself caught up in the political maelstrom that is Avalon..

I always enjoy the Hellequin Chronicles books SO much, so readable and beautifully done as far as flow and storytelling goes, with some marvellously drawn characters, all of which are enigmatically brilliant. I’m absolutely in love with Nate, although I would not want to get him mad..

The mythology is rich and full of depth, descriptively speaking the author has the knack of putting you right on the spot, making this whole world seem as real as our own, the action is always edge of the seat stuff and with each new instalment the relationships between the characters ebb and flow meaning you are always desperate for the next part.

Overall then a really great read, all of them, another strength being that you can read any one on its own, you don’t necessarily  have to read in order. A series that I hope will run and run.