Syl Hellias: an Illyri, the first of her kind to be born on Earth. Paul Kerr: a human, dedicated to his people’s resistance of the alien invasion. Brought together by chance they formed the strongest of bonds. Now they are to be punished for that love.
Exiled to the outermost reaches of the universe, Syl and Paul must each make journeys that will lead them to the horrifying truths harbored at the heart of the Illyri Empire. And to a force with the power shake the the universe to its very core.

I was a huge fan of book 1 in this series – Conquest – so to say I was excited to read Empire would be putting it mildly. The great news is that Empire is brilliant – taking the initial imaginative concept and expanding and even improving on it as things move forward for Paul, Syl et al, this was a magnificent read, utterly compelling, beautifully written with some visionary world building and totally cool characters.

Syl and Ani are with the sisterhood, Syl determined to find out Syrene’s secrets whilst Ani begins to find herself feeling at home. Paul and Stephen are off on enforced service within the Illyri military – separated by distance but working towards the same goal, all of them will make frightening and horrific discoveries about the conspiracy at the heart of the Illyri empire.

This is a series aimed at Young Adults – it is intelligent, superbly done and could equally have been written for adults – in that sense it defies a genre tag or a “target audience”. Realistically speaking, anyone who enjoys fantasy, science fiction, adventure or almost anything reading wise for that matter,  could get a lot out of this. There are some thrills and spills, mystery elements, a gorgeously drawn romance, extravagant and ingenious worlds to explore and bang at the heart of it simply a darn good yarn.

I am in love with all the characters, the good, the evil, the downright enigmatic and one of the best things about both Conquest and Empire is the intricate weaving of interpersonal relationships between all the players – in the case of Empire, the slow but sure downturn of the previously solid friendship between Syl and Ani is one of its strengths – a “coming of age” arc where the heart and soul of that particular pact is threatened by outside influences and I was totally absorbed by it.  Emotionally speaking all the character arcs pack a heck of a punch – Syrene is such a compelling and wonderful character, to pick at random one of the many others you will find here, she is so terrifically evil and yet absolutely engaging.

As for the Universe they all inhabit, it is magnificently drawn. Whilst Conquest was set mainly on Earth, Empire goes beyond the horizons and takes the reader on a fast, furious and brilliantly engaging rollercoaster ride around the galaxy – brought vividly to life and often horrifically scary, right there is another element to the story as a whole that will often have you on the edge of your seat.

I was considering baking John Connolly and Jennifer Ridyard a cake for writing such a fun, sometimes dark, always thrilling yet deeply emotional fantasy tale but then I read the end and realised I had to wait. WAIT for more. Not on. So instead they get a glare from me, all be it one with a hint of a smile, plus this review. Consider me one happy reader. Mostly. Ok, completely then. 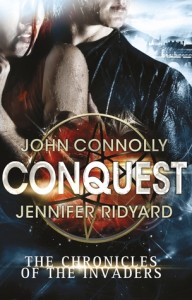 favourites give me gin I need a drink Not enough stars in the world
Source: http://lizlovesbooks.com/lizlovesbooks/liz-currently-loves-empire-by-john-connolly-and-jennifer-ridyard